Skip to content
Michelle Chui ’01 describes how her ambitions of journalism helped her find her calling
My Garden of Forking Paths
For the longest time, my life ambition was to become a journalist. Maybe it was because my nickname (as one of the few Asian Americans in the Kentucky town where I spent my childhood) was Connie Chung, and I grew up with NPR as an omnipresent soundtrack in my parents’ home. Or maybe I realized early that my income as a professional poet (my first life ambition) would likely be insufficient to support the 100 rescue dogs I intended to have someday, and journalism seemed like a more practical profession.
At Dartmouth, I became a huge WDCR groupie. I served as news director one summer, woke up before the crack of dawn to do news casts, and had the great honor of interviewing presidential candidates like John McCain and Bill Bradley when they visited campus during the New Hampshire primaries. I wrote for my hometown paper, the Lexington Herald Leader, one summer. I wrote copy at Voice of America another. I wrote for The Dartmouth, of course, and later co-founded the Dartmouth Free Press.
Even more importantly, I found opportunities at Dartmouth to grow into my identity as an Asian American and a woman of color. I had wonderful political science professors (e.g. Alex Wendt, Dale Turner, Mlada Bukovansky), who introduced me to crucially important conversations about group rights, different frameworks for thinking about justice, constructivism, the importance of dialogue, and so many other things. Little did I know at the time how profoundly these lessons would inform my life.
When the New York Times, Washington Post, and NPR somehow did not snatch me up right away after graduation, I interviewed for other jobs in New York City to be close to my partner (Justin Sarma ’01). I was supposed to go to an interview for a dream job not far from the World Trade Center on September 11, 2001. This didn’t happen…
When the smoke cleared a bit, literally and figuratively, Justin and I decided to move to the West Coast, where I lucked out on a job that magically brought together almost every important thread of my life for the first time. As a legislative researcher and community organizer serving low-income communities of color, I put my journalism skills to work asking questions, listening, and writing. At the same time, I found real-life applications for the theories of justice I’d discussed in seminars, practiced democratic dialogue. I had heated conversations about political strategy with a wide range of allies, built coalitions. One memorable election day, I helped organize get-out-the-vote efforts in Compton. This was wonderful, challenging, eye-opening work that spoke to both my inner policy nerd and tapped into a newfound sense that I was empowered to do something about the racial and economic inequalities that were part of the fabric of my childhood and my adult life.
This job led to other opportunities, including grassroots research to determine how many Arab-Americans were being quietly detained by the federal government post 9/11, electoral organizing, and so much more. I became deeply immersed in racial and economic justice work–but in some ways it felt like everything I did was just a small drop in the bucket of all that needed to be done. Eventually, mentors encouraged me to go to law school, and I did. Although I fantasized about being a racial justice impact litigator, I eventually realized that litigation was a bit too zero-sum for me. Like many other middle-born children, I’m more of a mediator and, it turned out, a pretty good deal maker. 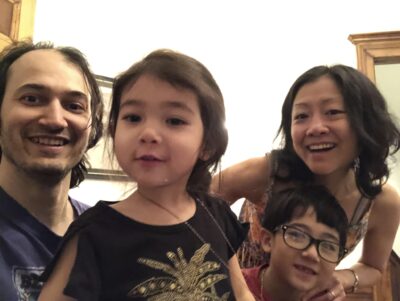 So here I am, many years later, after two transformatively awesome children and a few other career zig-zags. I’m now an Associate General Counsel at Girl Scouts of the USA–still trying to have democratic dialogues, still trying to work racial, economic, and social justice into everything I do. I’m somewhere good, I think, somewhere I want to be: doing more good than harm. I’m not as dramatically changing the world at the moment as I do in my fondest fantasies–but even this slow, incremental change means something. Most importantly, I’m still learning to be a better, more aware human, to be truer to myself. And I’m getting closer to having my 100 rescue dogs.

1 thought on “A Fight for Justice All Along the Way”