Carol Gieg, D'79, offers some advice to younger women and shares a poem that she wrote after the death of her husband.

First of all, quench your thirst for knowledge throughout your life.

Secondly, discover and nourish your “passion.” That is, an activity which, when immersed in it, you lose sense of time and place. The piece is completed, only after it has been shared with others.

Both will give you pleasure, will help you build lasting friendships, guide you to offer and to graciously accept, help from others throughout your life.

When I was 49 years old, I suffered a brain injury followed by neurosurgery. I survived and returned to work three months later. Shortly thereafter and, again, a year later, I had neuropsych testing. The first revealed that I had the same IQ, the second, an improvement overall.

During recovery, I reached for my pen as soon as I was able. Exercising my brain through writing as my passion, helped me to recover and to live a full life.

I wrote a book to encourage other victims of a brain injury, and let them know that they do not have to live lives predicted after being injured. Just as I did, they can recover much of what was lost, either through the brain creating new pathways or through regeneration of neurons (“neuroplasticity”). These facts were not widely known when I was injured and I hope my book has contributed to increased awareness.

It was only through nourishing my passion (writing) and continually learning, that I was able to both research and write a book.

Ironically, my husband has a “rapidly progressing” dementia resulting from a brain injury 40 years ago. I hope that my writing has inspired researchers to seek a cure. 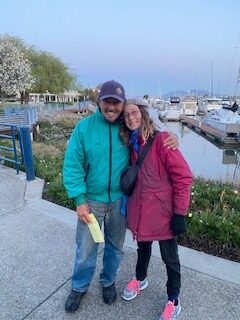 TWICE LOST IN A SINGLE LIFETIME

I bid you farewell, though it’s not the end.
Goodbye when all’s not yet lost.

You linger on as dignity deserts you,
We fight it, but at such a cost.

Your body still remembers,
But the image begins to fade.

Those long ago tender moments,
And the promises we made.

Creeping over you, soft and stealthy,
More bits and pieces gone each day.

Your depression separates you from me,
I miss you more than I can say.

Doctors told us there was no hope,
A better life for us now to create.

Wouldn’t it have been better, to be honest,
Rather than resign us to your fate?

I pity others for they too sensed,
All that you touched turned into gold.

You always saw the best in everyone,
Under your broad wings, all to enfold.

My face you no longer recognize,
Of my support, you’re no longer aware.

Still conscious enough to know what’s happening,
You’re distancing yourself from those who care.

Deep sorrow as I say farewell,
But such gratitude have I.

That the one I love more than life itself,
Won’t feel the pain I will after you die.

In summary, I regret not taking advantage more of classes devoted to the craft of writing. However Dartmouth encouraged and solidified my love for learning. Whatever career path you choose to pursue, rest assured that there will be an opportunity to contribute. Your decision will be better made if you practice your passion. Learning from the brain, passion from the heart.

1 thought on “Two Pieces of Advice for Women at Dartmouth”